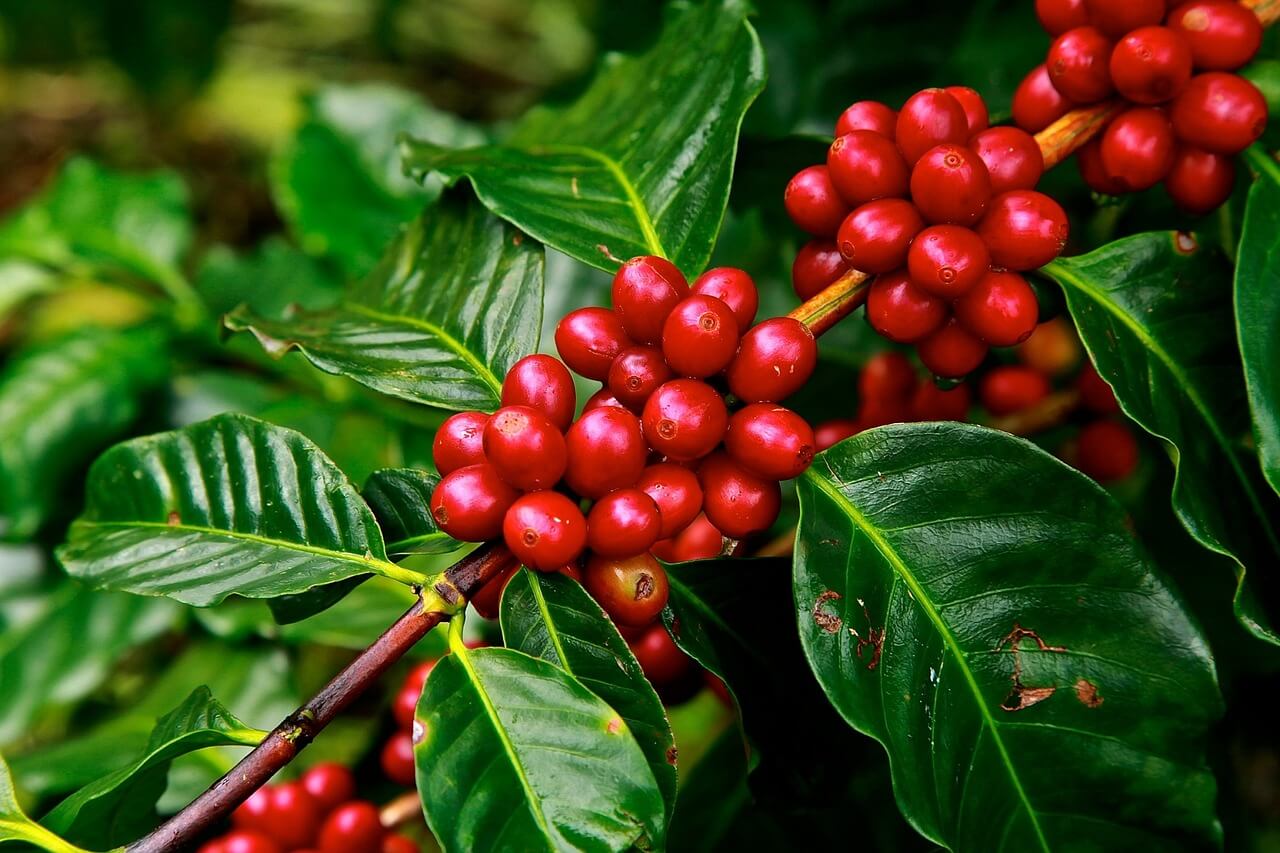 You’ve come to the right place! Today, we’ll cover everything you coffee lovers need to know to improve your daily cup of joe. I want to help you understand coffee better.

Let’s improve your daily cup together! Dig in!

Where do coffee beans come from?

The scientific name of a coffee plant: coffea

The coffee plant is native to tropical Africa, Madagascar, Mauritius, and Reunion in the Indian ocean. It grows as a small tree or a shrub.

Now, the fun fact is that the caffeine in the coffee beans is toxic and is meant to somewhat naturally protect the seeds of Coffea from herbivores (says Wikipedia), even though this doesn’t seem to work in all cases (there are animals that adore sweet and ripe coffee cherries!).

There are two ways of how to get coffee beans from the cherries:

After this process, the coffee beans are roasted (see more on roasting types below) and ground.

How many kinds of coffee are there?

There are more than 120 different species of the Coffea but the two most famous ones are Arabica and Robusta; you can find a list of different types of coffee beans below. What’s interesting to know is that there are more species being discovered regularly; in 2008 they discovered 2 new species in Cameroon!

Beans from different countries have a different body, acidity, flavor, and aroma. These are not limited to the growing region only but also the characteristics of the bean type, coffee plant species, and processing. Generally, the names Java, Kona, Colombian are given to coffees based on the region where it is grown.

Most commonly the coffee plants thrive on higher altitudes and they dislike freezing temperatures. Have a look at the map to see where the coffee in your cup comes from! 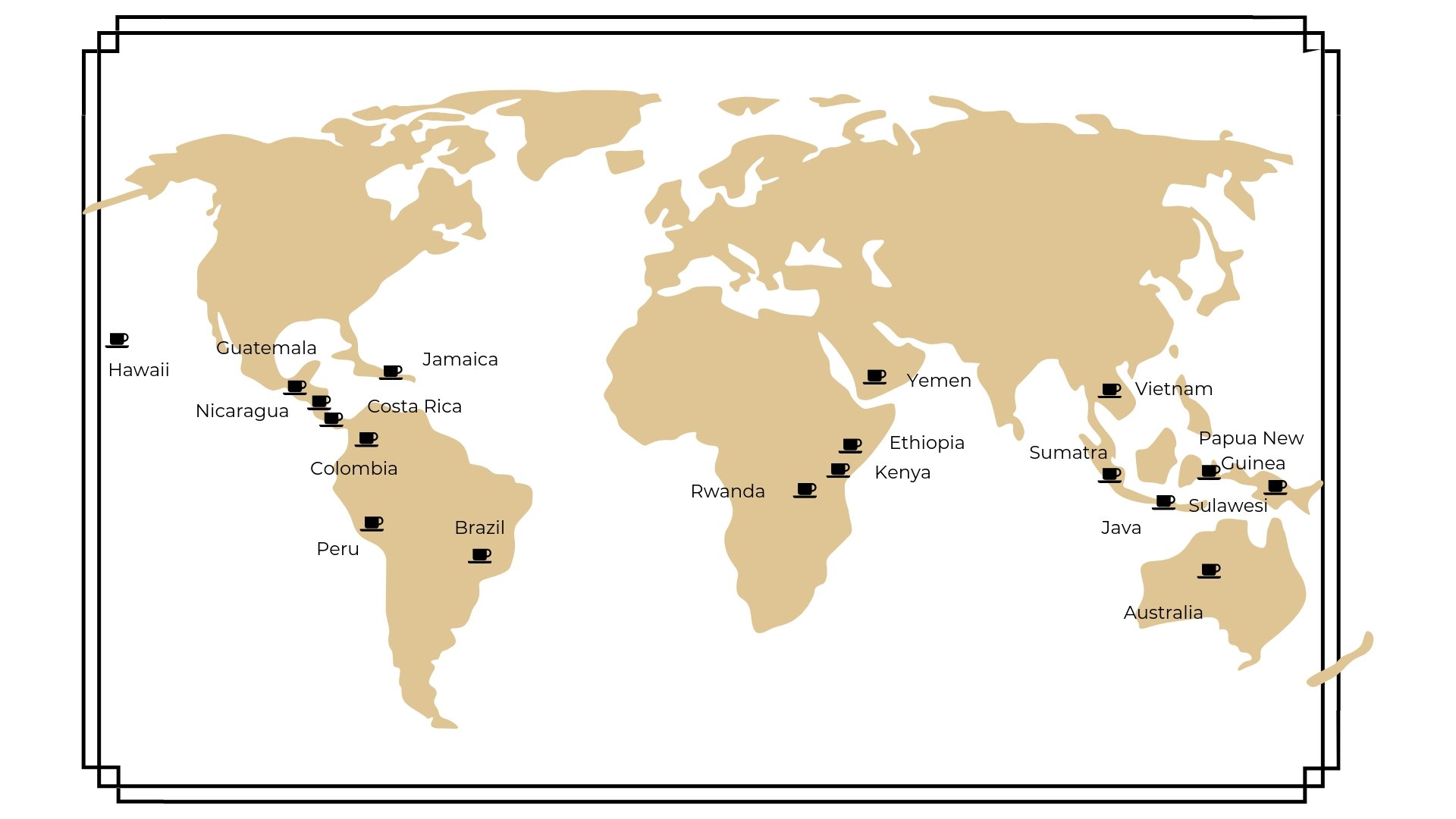 Where does coffee grow?

Nowadays, coffee is grown all over the world since it’s one of the most widely traded and popular commodities in the world. It’s an important export product for a number of countries, such as Africa, Indonesia, Central and South America, and the Caribbean.

To give you an idea, the top producing countries today are:

Apart from these 5, coffee is produced in more than 70 countries in the world.

Coffee From the Americas:

Coffee from the African region:

Coffee from Asia and Oceania:

Did you know that they also grow coffee in China? You can find the entire list of countries by coffee production here.

A brief history of coffee

Let’s have a look quickly at coffee history facts; how was coffee introduced to the Americas, and some fun facts about coffee consumption.

How did coffee get its name?

The Arabs had a word for coffee qawah, which somehow entered the Turkish language and turned the Arabian word into kahve. The Dutch apparently loved it; they adopted the word and changed it into koffie. It was through the Dutch language that the word coffee entered the English language back in the 16th century.

How was coffee invented?

There are no certain facts as to how coffee was invented. There are various stories of old that talk about mystics, goat-herders, and sheiks but no one actually knows.

In any case, all these men of legends reported consuming coffee one way or another because it gave them energy, vitality, and helped them suppress hunger. You can read more on the legends of coffee here. In any case, it all happened by chance. The people observed what the animals were doing (eating coffee cherries) and tried it by themselves as well, or ended up accidentally cooking/roasting the coffee berries.

Coffee Bean Types: which beans do we know?

In case you thought there was only one type of coffee beans, you were severely mistaken. But you’re not the only one. Back in the day, I was convinced that coffee was just coffee and that there was no such thing as a variety of coffee bean.

There are four main coffee bean types that are used in the coffee world today commercially. According to this archive, Arabica is grown in Latin America, East Africa, or Asia. Robusta is generally grown in southeast Asia, Brazil, and central Africa. Now, let’s have a look at what are the different types of coffee beans!

Arabica counts for 60% of the world’s coffee production.

Don’t be fooled: it may be most popular but it’s also the most delicate of the four coffee beans types! It’s quite moody and it can easily succumb to the disease. Since it’s often grown in large quantities, you can imagine how this can easily turn into a serious problem.

Arabica bean is grown in high altitudes, with Brazil being the largest producing country. It loves shade and rain. What’s more, the beans have a bright body, with a wide array of flavors and aromas. They’re also somewhat acidic. If you want to brew the best-tasting cup of Arabica coffee at home, look for the beans with a full body and lower acidity. That sort should be sweet, accompanied by lovely notes of fruits, chocolate, nuts, and florals.

Why is it called Arabica coffee?

We’ve established that the origins of coffee go all the way back to Ethiopia. But the Arabica got its name when the bean went on an adventure, namely from Ethiopia, over the Red Sea, to present-day Yemen. You can read more about it in this article.

Robusta is the second most grown coffee type in the world, right after Arabica. It’s much more tolerant and resistant to the environment and diseases. It can be grown in various altitudes, but it especially loves a hot climate with only occasional rain.

What’s interesting about Robusta is that it contains almost double the caffeine compared to Arabica. Still, this coffee has been grown everywhere, even in the areas that are not best suitable for coffee farming. That’s why the coffee can smell unpleasant or flat.

Overall, Robusta has a heavy body but smooth texture with hints of chocolate and low acidity, somewhat woody quality.

This type of coffee is hard to come by, but it still plays an important role in the world of coffee. It originated in Western and Central Africa, but it’s still difficult to grow it commercially.

Liberica plant somewhat managed to get to the radar of governments and farmers in the late 19th century, when Arabica was severely damaged by the disease called coffee rust. The Philippines were the first country to try Liberica and the results were promising at the beginning. But because of the dispute between the Philippines and the USA, Liberica disappeared off the radar until 1995.

Overall, Liberica coffee has a unique aroma with fruity and floral notes. It is full-bodied with a smoky taste, woody even or jungle-y. Those who’ve tried it claim that it is nothing like they’ve ever tasted before:

Excelsa is a member of Liberica coffee family, but it’s very different at the same time. It grows in large trees and similar altitudes to Liberica, mostly in SouthEast Asia. It is quite tolerant to dry areas as well as resistant to diseases.

Excelsa makes up about 7% of the worlds’ coffee production. It is largely used in blends to give them an additional kick of flavor and complexity. What’s more, it has a fruity and tart, and dark flavor profile.

Fun Fact: Decaffeination
The process of decaffeination happens while the beans are still green and immature. There are many ways in which producers can remove caffeine from coffee; they soak them in hot water or steam them, among other things.

For more info on variety of coffee, have a look at this informational video:

Roasting the coffee brings out the aroma of the green beans. These are literally unwritten blank papers, soft with a grassy scent. Roasting sets chemicals in motion, providing each batch of beans with specific flavor characteristics, scents, and aroma. It is overall a complex process that could even be considered art!

If you’re looking for a fragrant yet milt, fruity or floral coffee, a light roast is your type!

If you’re looking for a more traditional and flavorful cup of coffee, this is your choice. It’s also the most preferred type of coffee in the USA.

Looking for the heavy mouthfeel, strong smoky or even burnt flavor, with very low acidity (the darker the roast, the less acidity)? Go for a dark roast!

Different coffee makers require different coffee grinds. We grind coffee differently to get the best results in terms of flavor and aroma. You could use the same grinds for all brewers but that would result in lousy coffee as different brewers work in different ways.

But, coffee grinds and coffeemakers can be confusing at times. So, let’s have a look at the complete list of grind levels, how they look like, and when to use them.

Use for: café solo, Chemex brewer

Use for: drip coffeemakers

Use for: pour-over brewers (automatic and manual), siphon brewers, and vacuum pots

Coffee grind is smooth and fine when you touch it

Use for: espresso brewers, Moka pot

As you were able to see, there are many different sorts of coffee bean in the world. That also means that there are numerous different types of coffee available! Now, we’ll focus on the most popular kinds of coffee.

Short black or espresso, is the most important coffee type there is (or so I dare to claim). It’s the foundation of many espresso-based drinks. In other words, it’s a type of coffee made with a cappuccino machine.

Also latte for short, this type of coffee is espresso-based with steamed milk and topped with creamy microfoam. It’s sweet and quite milky compared to espresso.

Similar to a latte, cappuccino has more foam and it’s in many cases topped with chocolate. It’s served in a coffee cup, whereas latte is normally served in a tumbler glass.

The idea here is similar to cappuccino: espresso and steamed milk. The difference is that flat white comes flat, without any foam or chocolate.

Also known as short macchiato, this coffee is similar to espresso but it comes with a dollop of steamed milk and foam. There are different versions of this drink, depending on the country you’re visiting. In some countries, they serve it in a glass, in others in a small cup.

Also known as Americano, long black is a single shot of espresso poured into hot water.

Ah, if you think espresso is too light for you, go for a ristretto. It’s made the same way but with half the amount of water. Yes, it’s a very dark and concentrated espresso.

This one is more of a dessert than an actual coffee, lovely for hot summer days. It’s basically espresso with a scoop of vanilla ice cream.

One of my favorite coffee types while I was traveling around Spain, a cortado is made with little or no foam. It contains a single shot of espresso with an approximately equal amount of steamed milk.

A mix of cappuccino and hot chocolate, mocha is espresso with steamed milk, chocolate powder, and creamy microfoam.