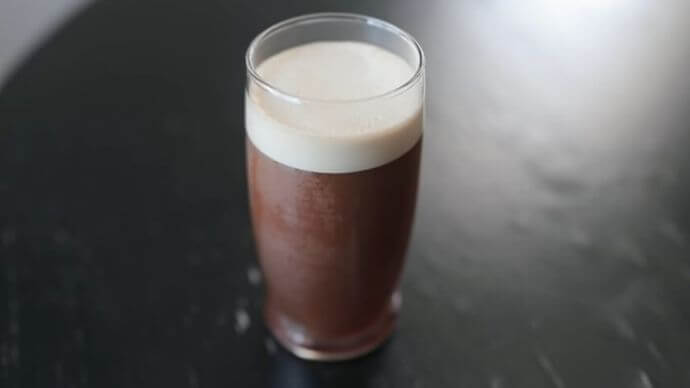 Save Money And Master [Starbucks] Nitro Cold Brew at Home

Do you love nitro cold brew but can’t afford it?

Nitro was designed back in 2012 and it’s been quickly taking over the coffee world thanks to Starbucks. Drinking nitrogen coffee is a unique, smooth, and rewarding coffee experience. Unfortunately, it can easily break your budget.

Luckily for you, Nitro coffee isn’t rocket science. It’s not complicated and you can easily make it at home!

Let’s have a look at how you can enjoy this creamy coffee on the budget from the comfort of your home!

When you buy a product via the links on IlCappuccinoExpress.com, I may earn a small affiliate commission at no extra cost to you.

What is Nitro Cold Brew?

Nitro coffee isn’t as fancy or complicated as it sounds. In fact, it’s pretty straightforward. According to Wikipedia,

Nitro cold brew coffee, commonly referred to as “NCB,” is cold brew coffee charged with nitrogen to give it a rich, creamy head, similar to nitro draft beer like Guinness.

In other words, this type of coffee is cold brew coffee infused with nitrogen. Nitrogen probably sounds like a dangerous thing to keep in your house; it sounds even worse when you think about drinking it, but it’s actually nothing out of the ordinary.

We’ve been combining drinks with gas for a very long time; think soda and beer! Coffee was apparently the next logical step for some reason. Now, the hype of Nitro coffee is taking over the world and people seem to love this new style of brewing. Many turned into complete Nitro devotees and refuse to have their coffee any other way.

Why Should You Make Nitro At Home?

Honestly, Nitrogen cold brew coffee is expensive. So that’s already a solid enough reason to make it at home yourself.

If you already make cold brew at home, you’ll be happy to know that you can easily turn it into nitro with only a few simple gadgets (that you may already have at home!).

Here’s why you should give this type of coffee a try!

How Do You Make Nitro Cold Brew At Home?

Let’s have a look at how to whip up this creaminess of a coffee from the comfort of your own home.

To begin with, cold-brew coffee at home. That’ll take you somewhere from 12-24 hours. Once you have your coffee concentrate, take your brew and nitro, and work your magic on it!

How do you add nitrogen to coffee?

You infuse your coffee with nitrogen by using the nitrogen charger and whipped cream dispenser.

There is a simple way to make nitro coffee at home: with a handheld nitro dispenser or a keg system. Based on my experience, research, and reviews, the best nitro coffee maker is NitroTapp Keg Kit ( with cartridges Included), but there are other solid options to choose from.

What Is The Best Coffee For Nitro Cold Brew?

There are many different beans to choose from, depending on your coffee preference. Some swear by dark roasts, others by light. We listed our top picks for cold brew coffee beans here.

Don’t feel like making nitrogen coffee at home? That’s alright, you can get nitro coffee online. Make sure to drink it from a glass and not straight from the can so that you don’t miss out on the cascade experience and the taste.

If you’re willing to experiment, use canned nitro in the recipes below and bring this new coffee hype to a whole new level.

Regarding the best-canned nitrogen coffee; there are several options available.

Rise Nitro cold brew: this is one of the best nitro coffees out there; it’s a very popular option for many people and a reasonably affordable one, given the fact they’re using only high-quality ingredients to make this brew. If you’re willing to experience a frothy cascade at home, Rise is an excellent option in terms of value for money. RISE is an award-winning brand that promises to be of the best quality and it’s both USDA organic and non-GMO. Their cold brew is naturally sweet and sugar-free. You can choose from different flavors so there’s something for everyone.

Quivr True Cold Nitro Coffee: vegan, gluten-free, and zero sugar, this cold brew is keto-friendly and made with only high-quality coffee beans. It’s smooth and energizing with hints of bittersweet chocolate. Don’t forget to drink it from a glass for maximum cascade experience. It contains about 300mg caffeine per can and the batches are 3rd party lab tested.

Starbucks nitro on Amazon: I haven’t tried it but the reviews aren’t too promising at the moment. You’re welcome to give a can or two a try since you can choose from 3 flavors: black coffee, dark caramel, and vanilla sweet cream.

Have a look at 5 unique and delicious nitro cold brew drinks you simply must try at home. These are budget-friendly and allow you to enjoy your daily cup of joe without splurging on fancy lattes in a coffee shop!

Make a fizzy combo of notro coffee (the recipe calls for a regular brew, but feel free to replace it!) and sparkling water: you only need three ingredients to make this drink; it may seem strange to combine coffee with soda but the coconut adds a sweet aroma and you can dress the glass with mint or lime wedge!

Okay, this is an alcoholic twist on the list, but it’s a mix of traditional Irish coffee with the untraditional Nitro brew. Combine Irish cream with whiskey and nitro to get this tasty, creamy, and aromatic drink that will impress your friends.

For all iced coffee lovers, this one is a treat to try. Combine nitro with a syrup, whipping cream, and sea salt. Yep, the salt does the trick and adds a great touch of refreshment!

If you need a sugar blast with your coffee, this is the recipe to try. Creamy coconut milk with sweet cream easily give that kick of creaminess and sweetness to your coffee. But for an extra treat, top it all with chocolate syrup.

You’ll need 4 ingredients and you can easily make this one at home! The whipped cream is optional, but it gives nitro cold brew an additional creamy boost you can’t afford to miss!

What is Starbucks nitro cold brew?

Our Nitro Cold Brew is created when our signature Cold Brew (slow-steeped for 20 hours) is infused with nitrogen as it pours from the tap. Nitrogen infusion creates microbubbles, giving the coffee a cascading, frothy texture.

The result is a velvety-smooth coffee with a subtly sweet flavor and a rich, creamy head of foam.

According to the company, Starbucks nitro coffee contains 280 mg of caffeine per 16 fl oz.

Nope. Nitro cold brew is free of any alcohol. It may look like a coffee cocktail or an Irish coffee in a pretty glass, but it contains zero alcohol. The texture may seem like you’re drinking a creamy Guinness, but the drink itself is free of alcohol.

Does nitro brew have more caffeine?

Do you add cream to nitro cold brew?

You can add anything you’d like to notro cold brew. Cream, sweeteners, and flavors as well (vanilla, toffee, hazelnut). You can dress it up any way you’d like.

Nitro cold brew isn’t your typical cup of coffee. For the first-timers, nitro can be a bit…unusual. It’s not as bitter as regular black coffee and it’s slightly on the sweeter side with extra notes of flavor. Some people compared it to coffee with almond milk.

Keep in mind that nitro is made with the cold brewing process. This type of coffee is easier on the stomach, less bitter, and less acidic. That makes the coffee smooth than with the traditional hot method.

The nitrogen boosts the flavor of the coffee and makes it slightly sweeter. Overall, the end result has a silky mouthfeel, slightly frothy, creamy yet refreshing. Think of it as a Guinness latte with more coffee but no alcohol!

The only difference between cold brew vs nitro cold brew (apart from nitrogen), is the flavor. They’re both less acidic (cold brew coffee naturally is) but the nitro version is naturally more sweet, creamy, and smooth.

(Starbucks) Nitro Cold Brew at Home: Is It Worth It?

Nitrogen-charged coffee is a rewarding and refreshing new way to drink cold brew coffee. While buying it daily can burn a hole into your wallet, you can easily save money and learn how to make it at home!

It sounds complicated and full of chemistry, which is why most people probably never try making it at home, but all you really need is a nitro coffee dispenser and nitrogen chargers! Don’t worry, the process is easy even if you’re not a scientist.

Don’t want to DIY nitro at home? You can still get canned nitro cold brew online instead of visiting Starbucks on a daily basis; Rise cold brew is an affordable, organic, and healthy option that packs high-quality ingredients, comes in a variety of flavors, and it’s an award-winning nitrogen coffee! It’s smooth, sugar-free, and just the easiest black coffee you’ll ever drink.

There are a few ways to get your hands on nitrogen-charged coffee and it can easily become your daily cup of coffee. That way, you can customize the coffee to your taste, save money, and have fun while brewing! After all, cold brew coffee is less acidic and easier on the stomach than hot brewed coffee. Nitrogen just adds an extra kick of smoothness, creaminess, and sweetness into the mix!

Il Cappuccino Express is a participant in the Amazon Services LLC Associates Program, an affiliate advertising program designed to provide a means for sites to earn advertising fees by advertising and linking to Amazon.com. That being said, here you can only find products that I recommend and honestly believe will make your coffee journey more enjoyable! This is only a small percentage and represents no extra charge to you. Click for Full Disclosure.

We use cookies on our website to give you the most relevant experience by remembering your preferences and repeat visits. By clicking “Accept All”, you consent to the use of ALL the cookies. However, you may visit "Cookie Settings" to provide a controlled consent.
Cookie SettingsAccept All
Manage consent

This website uses cookies to improve your experience while you navigate through the website. Out of these, the cookies that are categorized as necessary are stored on your browser as they are essential for the working of basic functionalities of the website. We also use third-party cookies that help us analyze and understand how you use this website. These cookies will be stored in your browser only with your consent. You also have the option to opt-out of these cookies. But opting out of some of these cookies may affect your browsing experience.
Necessary Always Enabled
Necessary cookies are absolutely essential for the website to function properly. These cookies ensure basic functionalities and security features of the website, anonymously.
Functional
Functional cookies help to perform certain functionalities like sharing the content of the website on social media platforms, collect feedbacks, and other third-party features.
Performance
Performance cookies are used to understand and analyze the key performance indexes of the website which helps in delivering a better user experience for the visitors.
Analytics
Analytical cookies are used to understand how visitors interact with the website. These cookies help provide information on metrics the number of visitors, bounce rate, traffic source, etc.
Advertisement
Advertisement cookies are used to provide visitors with relevant ads and marketing campaigns. These cookies track visitors across websites and collect information to provide customized ads.
Others
Other uncategorized cookies are those that are being analyzed and have not been classified into a category as yet.
SAVE & ACCEPT
error: Content is protected !!